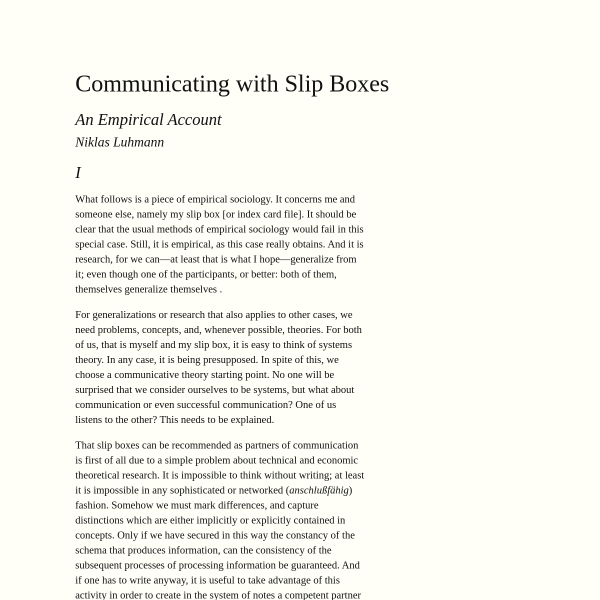 excerpt As a result of extensive work with this technique a kind of secondary memory will arise, an alter ego with who we can constantly communicate. It proves to be similar to our own memory in that it does not have a thoroughly constructed order of its entirety, not hierarchy, and most certainly no linear structure like a book. Just because of this, it gets its own life, independent of its author. The entirety of these notes can only be described as a disorder, but at the very least it is a disorder with non-arbitrary internal structure. Some things will get lost (versickern), some notes we will never see again. On the other hand, there will be preferred centers, formation of lumps and regions with which we will work more often than with others. There will be complexes of ideas that are conceived at large, but which will never be completed; there will be incidental ideas which started as links from secondary passages and which are continuously enriched and expand so that they will tend increasingly to dominate system. To sum up: this technique guarantees that its order which is merely formal does not become a hindrance but adapts to the conceptual development. on 2/9/2020, 10:55:32 PM

Zettelkasten: It’s Like GTD for Writing and Here’s Why You Should Consider It references Communicating with Slip Boxes on 2/9/2020, 10:54:25 PM