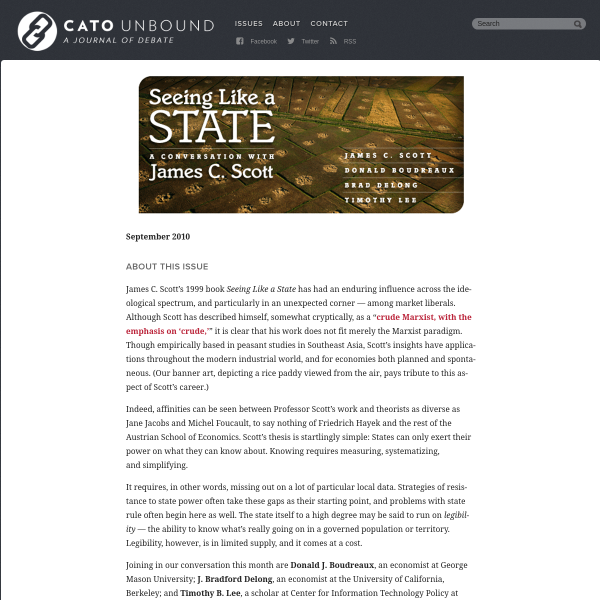 A Conversation with James C. Scott

quote The man of system… is apt to be very wise in his own conceit; and is often so enamoured with the supposed beauty of his own ideal plan of government, that he cannot suffer the smallest deviation from any part of it. He goes on to establish it completely and in all its parts, without any regard either to the great interests, or to the strong prejudices which may oppose it. He seems to imagine that he can arrange the different members of a great society with as much ease as the hand arranges the different pieces upon a chess-board. He does not consider that the pieces upon the chess-board have no other principle of motion besides that which the hand impresses upon them; but that, in the great chess-board of human society, every single piece has a principle of motion of its own, altogether different from that which the legislature might chuse to impress upon it. on 8/26/2019, 7:17:29 PM

quote It is upon this account, that of all political speculators, sovereign princes are by far the most dangerous. This arrogance is perfectly familiar to them. They entertain no doubt of the immense superiority of their own judgment. When such imperial and royal reformers, therefore, condescend to contemplate the constitution of the country which is committed to their government, they seldom see any thing so wrong in it as the obstructions which it may sometimes oppose to the execution of their own will. […] The great object of their reformation, therefore, is to remove those obstructions; to reduce the authority of the nobility; to take away the privileges of cities and provinces, and to render both the greatest individuals and the greatest orders of the state, as incapable of opposing their commands, as the weakest and most insignificant. on 8/26/2019, 7:19:44 PM

excerpt At one level, the common law might be said to be the product of the English crown: after 1066, English monarchs understood that their Norman blood would be less disagreeable to their subjects if these subjects were allowed to keep their local customs. As long as these customs kept the populace productive (and, hence, taxable) — and as long as these customs posed no serious threat to the security of the crown — the crown courts adopted into law many of the customs and norms that spontaneously arose from the everyday actions of ordinary folk going about their daily lives. That is, with relatively few exceptions, the law in England was not designed; it emerged decentrally and was discovered by judges. on 8/26/2019, 7:26:44 PM

quote Civilization advances by extending the number of important operations which we can perform without thinking about them. on 8/26/2019, 7:29:40 PM

excerpt We make constant use of formulas, symbols, and rules whose meaning we do not understand and through the use of which we avail ourselves of the assistance of knowledge which individually we do not possess. We have developed these practices and institutions by building upon habits and institutions which have proved successful in their own sphere and which have in turn become the foundation of the civilization we have built up. on 8/26/2019, 7:30:28 PM