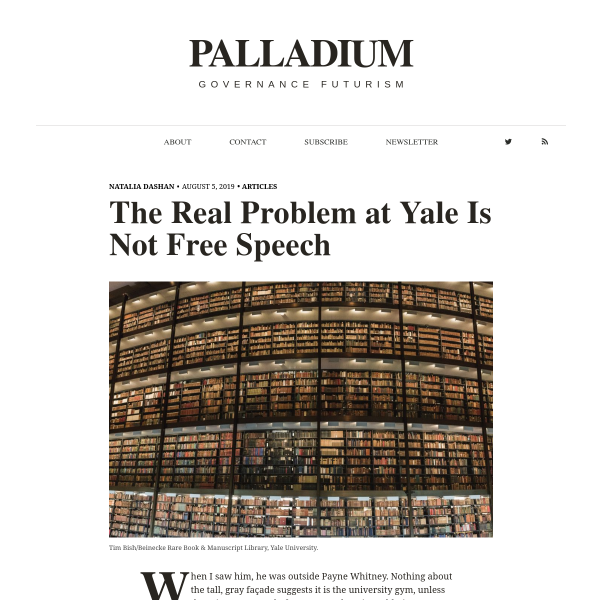 The Real Problem At Yale Is Not Free Speech

excerpt But there is more to selling out that nobody talks about. These jobs are the dream jobs of the middle class. They’re not supposed to be jobs for the sons and daughters of millionaires and billionaires—these kids don’t actually need the money. They want independence from their parents and proof that they can make it on their own—and prestigious work experience—but they have wealth acquired through generations that they can always fall back on. These people are generally as harmless as the middle class—which is to say completely harmless. They keep to themselves. They quietly grow their bank accounts and their 401ks. And just like the real middle class, they don’t want to risk their next promotion through being too outspoken. They have virtually no political power. This mindset is best encapsulated by: “I’ll go with the program. Please leave me alone to be comfortable and quietly make money.” They effectively become middle class, because there is no longer any socially esteemed notion of upper class. They have a base of power, of f-you money, that they could use to become something greater than just another office worker or businessperson. But there is no script for that, no institutional or ideological support. What would it even mean to be an esteemed, blue-blooded aristocrat in 2019? So they take the easy and safe way. on 8/10/2019, 10:05:07 PM

excerpt Western elites are not comfortable with their place in society and the responsibilities that come with it, and realize that there are deep structural problems with the old systems of coordination. But lacking the capacity for an orderly restructuring, or even a diagnosis of problems and needs, we dive deeper into a chaotic ideological mode of coordination that sweeps away the old structures. on 8/10/2019, 10:20:10 PM

excerpt Yale students, if they weren’t powerful when they came in (and most of them were), they gain power by being bestowed a Yale degree. What would you do with this power? You don’t want to abuse it; you’re not outright evil. No, you want something different. You want to be absolved of your power. You are ashamed of your power. Why should you have it, and not somebody else—maybe somebody more deserving? You never really signed up for this. You would rather be somebody normal. on 8/10/2019, 10:29:55 PM