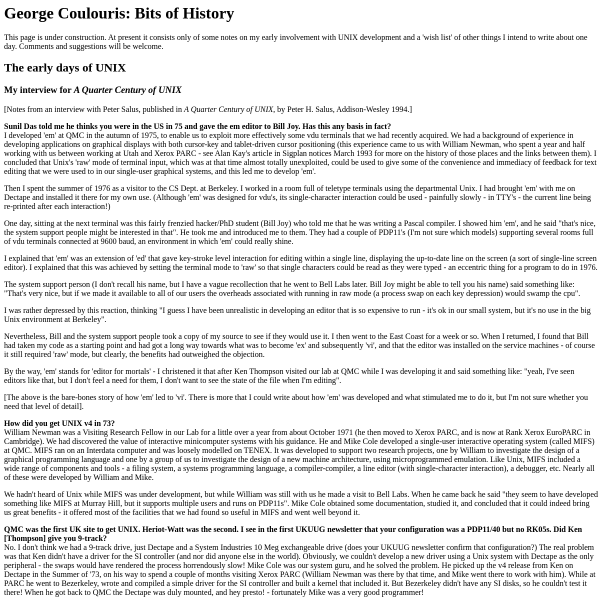 excerpt By the way, 'em' stands for 'editor for mortals' - I christened it that after Ken Thompson visited our lab at QMC while I was developing it and said something like: "yeah, I've seen editors like that, but I don't feel a need for them, I don't want to see the state of the file when I'm editing". on 6/22/2020, 5:20:03 PM

excerpt On ADM-3s and most other contemporary vdus it used control keys. At QMC we modified some VDUs. We had some ITT 3210 vdus that had a block of blue 'arrow keys' on the right of the keyboard. These were only functional when the terminal was in 'full screen mode', when they could be used to move the cursor to a new screen position and overtype the character at that position. This was all local interaction; in 'full screen mode' the contents of the screen were transmitted only when the Send key was pressed. We modified the these terminals to send control codes when the 'arrow keys' were pressed in normal character input mode. This enabled the software to intepret them as editing codes. This enabled me to implement Em in a more usable manner. It also led to the development of 'ded', a full screen editor that was modeless,by my colleague Richard Bornat. Subsequently, we obtained a larger number of Hazeltine 1510 terminals. These were microprocessor controlled and we re-programmed them to provide a larger set of dedicated cursor control and character editing keys (move forward a word, move backward a word, delete character backward, delete character forward, delete word backward, delete word forward, etc.) This provided another huge step forward in usability and allowed us to maintain our modeless approach to screen editing, which was, we feel, superior to the Vi approach. on 6/22/2020, 5:28:22 PM

excerpt I explained that 'em' was an extension of 'ed' that gave key-stroke level interaction for editing within a single line, displaying the up-to-date line on the screen (a sort of single-line screen editor). I explained that this was achieved by setting the terminal mode to 'raw' so that single characters could be read as they were typed - an eccentric thing for a program to do in 1976. on 6/22/2020, 5:29:14 PM